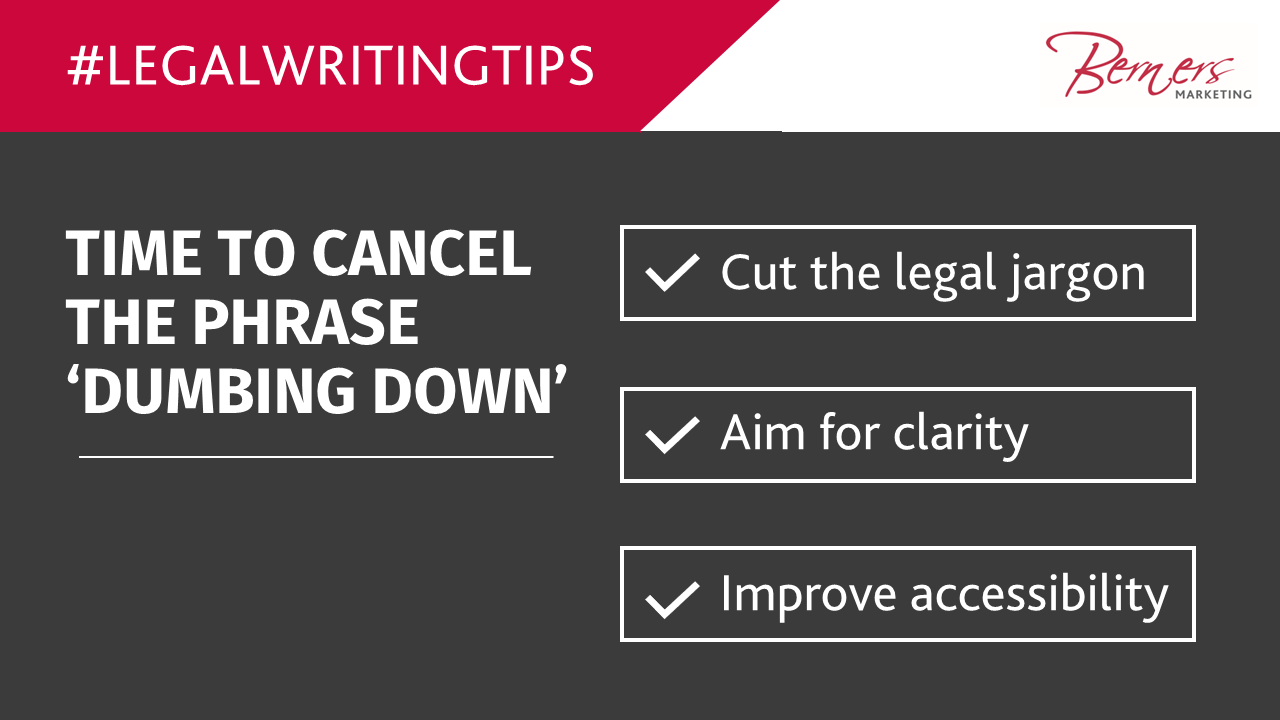 Some lawyers really appreciate input from an editor, but not everyone enjoys having their work edited.  Those that welcome input often understand that a fresh perspective can be beneficial, as it is easy to be too close to one’s subject and fall into the use of jargon and pet phrases. Lawyers that dislike being edited by a non-lawyer sometimes express the concern that their content is being ‘dumbed down’.

The verb ‘to dumb down’ came from America and according to the Oxford English Dictionary, means ‘to reduce or adapt to a lower level of understanding’.

When it comes to writing about the law, unless you are writing for other lawyers in the same area of practice, then it is highly likely that you will be writing for someone with a lower level of understanding of the topic.  This does not mean that they are less intelligent, as implied in the Collins Dictionary: ‘To make or become less intellectually demanding or sophisticated’.

Whatever our level of education, we appreciate when a doctor talks about a prognosis in plain English rather than using technical medical terms. Such clarity does not detract from their expertise, in fact it enhances his or her bedside manner.

Time to cancel the phase ‘dumbing down’

But should we even be using such an expression these days, especially if it implies that someone who is dumb is less intellectual or less sophisticated?

Dumb was once widely used to describe a person who could not speak and implied the person was incapable of expressing himself or herself. … People living with speech and hearing disabilities are capable of expressing themselves in writing, through sign language and in other ways. Additionally, a person who does not use speech may be able to hear. Avoid these terms as they are often used inaccurately and can be offensive.

Communicating with clients requires a balance between legal accuracy, professionalism, and accessibility. Too often jargon or formality can be seen as ‘professionalism,’ but is it truly professional if your client does not understand it? How impressive is your bedside manner if they feel too intimidated to ask for clarification?

‘I volunteer with people who do not have English as their first language, and they often bring in correspondence from the Government or their lawyers for an explanation,’ says Sue Bramall.

A recent example of something from a solicitor which seems quite straightforward to an English person, but can be confusing to the client was:

This could have been expressed more clearly as:

Extreme cases include verbose, confusing writing, full of long words and run-on sentences. Take this example from a lease agreement, which won a ‘Golden Bull Award’ from the Plain English Campaign in 2020:

Upon any assignment of the demised premises approved as aforesaid to pay to the Lessor a sum equal to ten per centum of any increase between the premium paid under this Lease and the consideration paid on such assignment or such sum as shall be certified to be the then current market value of the demised premises by an independent valuer appointed by the President of the Royal Institution of Chartered Surveyors, at the request of the Lessor whichever shall be the greater and if the sum so certified shall be the greater then the costs of such appointment shall be paid by the Lessee PROVIDED THAT the sum payable to the Lessor in the case of a Lessee not the original Lessee shall be calculated by reference to the greater of the consideration paid by such Lessee for the leasehold interest or the sum certified as aforesaid at the time of his purchase as the case may be.

It is important to remember that 'professional' does not have to mean ‘complicated’, and that there is no need to use five words where one will do. Clarity in communications is better for everybody.

An example of good practice is the online bank Monzo which has really nailed its colours to the mast in terms of making themselves accessible to their clients.

Financial services, like other professional services, usually take a formal tone in their communications with clients. But Monzo has made a decision to use simpler, friendlier language, and has published its 'tone of voice' guidelines online.

As they put it, ‘We’re friendly people, and we don’t want to come across like a cold, faceless organisation. So use the kind of language you’d use if you were talking with the person you’re writing to, and avoid business-speak.’

Monzo's approach makes a refreshing change, it promotes transparency, and it builds trust.

In 2015, the Financial Conduct Authority told financial services companies that their style of writing often ‘adds to consumer misunderstanding and consequently a lack of trust’. So, it made sense for this new online-only ‘challenger’ bank to be one of the first to buck the trend, with a deliberate attempt to be more open and engaging.

The bank’s tone of voice guidelines are designed to cover all types of communication, including formal policy documentation, such as the Monzo Terms and Conditions, which were awarded the Fairer Finance ‘Clear and Simple Mark’ in 2018.

Making its communications easier for everyone to read and understand doesn't mean that Monzo has lowered any standards. After all, financial services are also highly regulated, with high levels of consumer protection driving regulation.

“Of course, a new business has the luxury of starting afresh with a clean sheet of paper,” says Sue, who concludes “I suspect legal precedents are often rolled out without any throught as to whether the language is no longer appropriate or whether they could be improved.”