This book review was first published by The Law Society Gazette in February 2022. 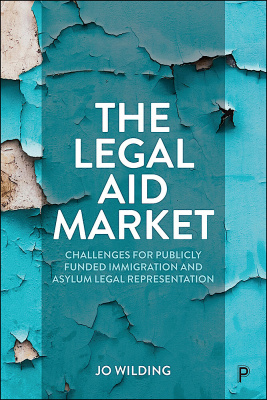 Marketing budgets tend to chase the most profitable work, so in the last two decades of marketing legal services my encounters with Legal Aid funded work have been limited to activities such as publicising landmark cases and directory entries.  There is rarely a need to generate new enquiries, as work is often being turned away.

This is particularly the case in the realm of asylum and immigration law, where normal market forces have been disrupted as policymakers try various business models to shift costs and risk around a complex eco-system. But an imperfect market or distorted supply chain is interesting for a marketeer.  As I also volunteer with a charity which helps asylum seekers and refugees, and find the system hard to fathom, I was delighted to have a chance to review a book which was published in September 2021: THE LEGAL AID MARKET: Challenges for publicly funded immigration and asylum representation, by Jo Wilding, Policy Press, Bristol.

Jo spent time in Iraq in the early 2000s before training and practising as a barrister with Garden Court Chambers. She is an author and researcher who published the report ‘Droughts and Deserts. A report on the immigration legal aid market’ in 2019 highlighting the lack of provision in parts of the country, and she gave evidence to the recent All-Party Parliamentary Group on Legal Aid.

The first chapter provides a concise summary of the evolution of asylum and immigration law, the current Legal Aid funding regime, and the rise and fall in the number of legal service providers, which helps to explain why the system currently works as it does. This is followed by a chapter of business case studies from law firms and not-for-profits which bring the issues to life.

Understandably, the focus on ‘representation’ means that the book leans towards the legal supply-side, but to understand any market, you also need to understand demand and some indication of the market from a macro-economic perspective would have been helpful. For example, how does the number of asylum seekers arriving each year compare to matter starts? How is this spread between work from detention centres or deportations, legal help, fresh claims, judicial review or appeals? (Although it happened after the book was published, one wonders how the sudden influx of 20,000 Afghan refugees will have been accommodated in the already-stretched system).

Jo draws on a solid body of academic research, which was informative but sometimes this came across as rather theoretical and remote from the diverse range of participants which I encounter.  For example, the two-dimensional characterization of ‘humans or econs’ (developed by economists Thaler and Sunstein) reads a bit like ‘people who care’ or ‘people who chase profit’, when people might be both.  Am I an ‘econ’ four days a week that I run my business (and pay tax), but only a ‘human’ on the one day a week when I volunteer?

Taxpayers are acknowledged as the ultimate clients, but there was limited exploration of the need for overall control of expenditure and the interplay with other public-funded budgets. For example, the longer an asylum seeker is caught in the immigration system, the longer they incur housing costs (which include substantial profits for shareholders, contractors and ultimate landlords) and the longer it will be before they start to work, earn a living and pay taxes. Speedier settlement of asylum claims would save costs elsewhere in the system.

Jo breaks down and explores the numerous challenges from the perspective of the legal service providers in four key areas.

‘Broken swings and rusty roundabouts’ explores the financial viability of the work and difficulties in reconciling quality and providing sufficient access under a monopsony: a market where there is only one buyer and multiple sellers. I found myself wondering how the lawyers ended up with such a bad deal, when other parts of the eco-system, such as housing and education, seem to have managed to negotiate themselves lucrative and risk-free government contracts.  Colleges seem to be funded for a number of places rather than any outcomes, with awfully low expectations in the level of English that will be achieved. The housing providers have multi-million-pound contracts which provide landlords with above average market rates for the direst properties.  How do these funding systems compare? And what can be learned from their approaches to negotiation with the Government?

‘New framework for demand’ examines different types of demand in the system, cascading from the value provided by the lawyers to the Home Office to help make a lawful and fair decision on the request for protection from persecution, indiscriminate violence or other serious harm.

In a chapter about demand, a marketer would normally have compared the differing needs of various groups of service users (such as children, families, victims of torture or trafficking, etc) and examined how well those different needs were being met. Instead, the academic framework categorises demand as arising in two main stages (potential-client demand and in-case demand) and in two main types (value demand and failure demand).

Jo lays out clearly the inefficiencies (failure demand) which emanate from the poor design of the system and operations at all levels: Home Office, Legal Aid Agency, and among some lawyers – highlighting also how ‘efficiency’ in system compliance (ticking the right boxes) is not necessarily the same as meeting client needs, especially if inadequate advice then leads to an appeal or fresh claim.  This section provides a great blueprint for anyone who will be looking to improve the system.

‘Droughts & deserts’ draws on the author’s previous research highlighting how many areas of the country have no provision or very limited provision, and how firms decide to prioritise the work that they take on and how barristers prioritise the firms they are happy to work with.  She also explores why supply has not increased to meet demand, meanwhile the LAA claim they saw no evidence of difficulties in recruitment at the time of the research. 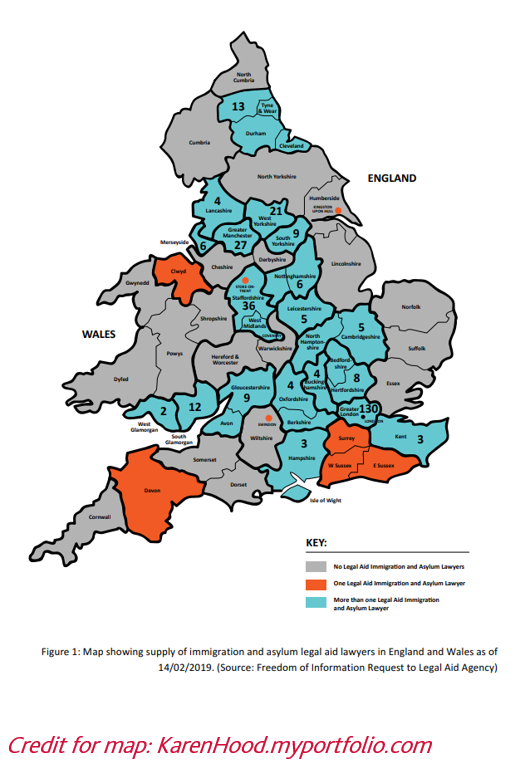 The map of the droughts and deserts is a perfect example of the power of a picture speaking a thousand words, and the book would have benefited from a few more charts and diagrams. I wasn’t sure how clear some of the operational issues would be to a reader who was not intimately familiar with the legal profession, and a flow chart of the asylum system with a connected guide to the fee structure would have been useful additions.

This book is a well-crafted exposé of the inadequacies of the current system for supporting asylum seekers through the immigration system, arguing that “the funding regime creates an explicit conflict between financial rationality and quality in the sense of ‘doing all the work the case needs’ and responsiveness to in-case demand.”

Jo doesn’t flinch from addressing the issues around the differing quality of legal services provided to asylum seekers resulting from lack of training and supervision, and the existence of some known poor quality law firms alongside those which can be trusted by clients and the Home Office.

I have another book on my reading pile, Refugee Tales IV which, as it sounds, is a collection of stories from individual asylum seekers told to journalists. In one story, the author comments on how it appears that solicitors just sign up as many asylum seekers as they can for a fee and then do very little.  Conscious that there are good and bad operators in every sector, I had gained a similar impression from some of the people who come to the helpdesk where I volunteer. Recently a gentleman came with a letter from his MP which said that a decision had been made (but didn’t say what the decision was) and he was beside himself as had not heard from his solicitor and couldn’t get them to return his calls.

Interestingly, the SRA is pushing strongly towards the use of customer review systems for other legal services and it is now quite common for individual solicitors to have scores which are public facing (for example Review Solicitors) or internal (for example Insight6). Perhaps the latter would be worth exploring to help address this issue and shine a spotlight on the poor performers?

Chapter 7 ‘No Choice, no Voice, no Exit’ explains how asylum seekers are unable to exercise the usual strategies available to members of the public who are poorly served in public services.

While there is no provision in some geographical areas, even where there is more than one provider there is no meaningful information on which people can make a choice, as peer reviews are not published.  “Newly arrived asylum seekers do not read Chambers and Partners or the Legal 500” and many did not understand the basis of their instruction to a lawyer (I believe client care letters are not usually translated).

Asylum seekers are often signed up to a lawyer on arrival, but then dispersed to another part of the country (which explains why I have met asylum seekers in Staffordshire who have an immigration lawyer in Glasgow) and cannot move their case to another provider, except where a formal complaint has been made or upheld.  Ordinary people think twice about making a complaint about a solicitor, so it is not surprising that few complaints are received from asylum seekers, and I don’t believe there is any route for an external agency to raise a concern.

The author also examines the problems and tensions that arise from the ‘command and control’ system of compliance and monitoring when the systems are designed to guard against deliberate misconduct (which one assumes has happened in the past) rather than facilitate the work.

Jo concludes with a chapter about ‘Why we need to think about systems’, pointing out that “Guesswork is a bizarre way of setting prices, at least when actual cost data could reasonably be obtained by paying hourly rates for a trial period or to certain trusted advisers.”  Such information (with careful scoping) might also be acquired by a data scientist analysing a large volume of timesheets from trusted firms.

I have recently seen how one of the banks works with charities in the sector to better understand the system needs of asylum seekers trying to open bank accounts without the usual documentation, while also fulfilling the challenges of ‘know your client’ and ‘money-laundering’ compliance. So, such obstacles are not impossible to overcome with a collaborative approach.

For anyone who needs to or wants to understand many of the challenges within the legal aid asylum and immigration system, this is a really useful read.

As reported in the Government’s Migration Transparency statistics, there were 125,000 asylum cases in the system in June 2021 (before the Afghanistan crisis), double the amount reported in 2014, so this book shines a spotlight on some significant problems which need to be addressed if this backlog of asylum cases is to be reduced.